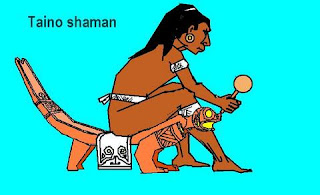 Did You Know - Among the Taino, the behike or shaman, was usually in charge of curing the ills in the community, thanks to his or her knowledge of medicinal plants and interaction with the spirit-world. Sometimes kasike (community leaders) took on a dual role of chief and medicine person. Kasike were also recorded as calling on behike for advice in major decisions affecting the well-being of the community. Alogn with the term behike (behique), other terms were used to identify this or a similar community role including bohitiu, buhiti, bohike, and piaie (piaman). -- UCTP Taino News © 2007