The Stingray and Taino Culture 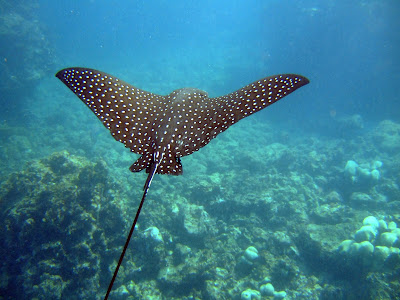 Did You Know: Since ancient times, stingrays have been a part of the Caribbean’s marine environment and the cultures of the region’s Indigenous Peoples. Taino and other Caribbean Indigenous Peoples, for example, would traditionally use the barbed spine located toward the bottom of a stingray’s tail in various ways. Stingray barbs would sometimes be used as tips for spears and arrows used for hunting or weapons, as well as for adornments like necklaces and bracelets. Like sharkskin, the rough skin of certain stingrays were also used as a grating tool to grind yuka (yuca/cassava/manioc) into a fine powder.  Some Taino words for stingrays include Libusa, Sabina, Lebisa, and Chucho (spotted eagle ray). - UCTP Taino News © 2013
Posted by UCTP TAINO NEWS at Thursday, August 22, 2013 No comments: