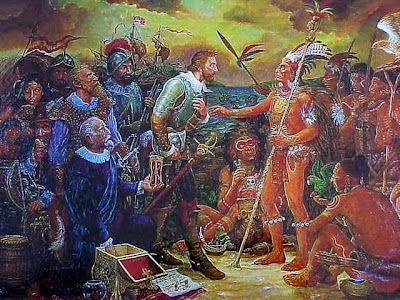 Did You Know: The Taino ‘name’ Agueibana (Agueybana) is related to more than one indigenous historical figure. In the 15th century, among those persons recorded with the name Agueybana in Boriken (Puerto Rico) were 'Agueybana the elder', the leader who entered into guaitiao (making relations ceremony) with Ponce de Leon and 'Agueybana el Bravo' , the leader who led a latter attack against Spanish forces. Along with these two Kasike (leaders), there are at least two naboria (local people), Martinicio and Perico, who carried the 'name' Agueybana. They were documented within the encomienda system in Boriken. There is also a record of another leader named Francisco Agueybana residing in Kiskeia (Dominican Republic) during the same time period as those who were recorded in Boriken. - UCTP Taino News © 2010﻿
Posted by UCTP TAINO NEWS at Tuesday, October 12, 2010 No comments: