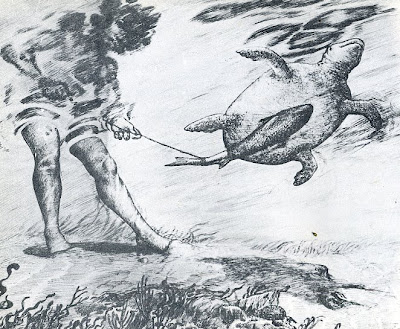 DID YOU KNOW: The term guaikano (guaicano) or guaikan is a Taíno word for the remora fish (scientific name: Echeneidae). Sometimes called a suckerfish, the guaikano (remora) is best known for its distinctive dorsal fin, which takes the form of an oval, sucker-like organ allowing them to take a firm hold against the skin of larger marine animals and even boats. Usually found in tropical or temperate waters, guaikano are known to grow between 1-3 ft long (30–90 cm). Among the Taíno, the guaikano was once used by fisherman, specifically, because of its abilities to attach on to larger animals such as turtles and sharks. A cord or “kabuia (cabuya)” would be tied to the guaikano’s tail, and once the fish attached, a Taíno fisherman could simply haul in both the guaikano and its host. - UCTP Taino News © 2011