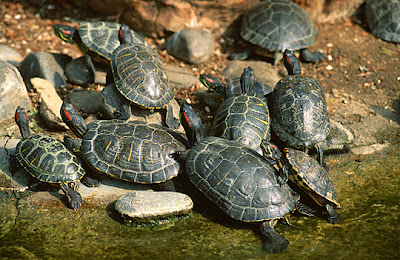 Did You Know: “Hikotea” (jicotea) is a Taino word for various land and fresh water turtles. The term hikotea (hee-koh-teh-ah) is still used throughout the Greater Antilles to identify these turtles. In ancient times the hikotea was directly linked to Taino creation, as the primordial mother of the people was a turtle who transformed into a woman. As a result of this ancestral distinction, many persons still view it as an offense to kill or eat a fresh water or land turtle. A further spiritual distinction of the hikotea is that it carries the numbers of a sacred calendar of the people on its shell. Patterns on the outer edge of its shell coincide with the sacred lunar calendar cycle of 28 days from full moon to full moon. The hikotea’s additional shell patterns correspond with the 13 moons of the lunar year. - UCTP Taino News (c) 2013
Posted by UCTP TAINO NEWS at Thursday, December 19, 2013 No comments: