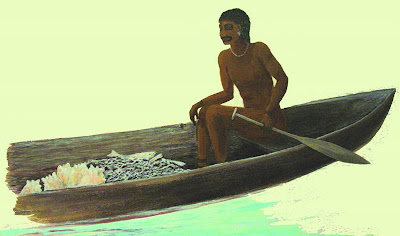 Did You Know - The first Europeans to travel to the islands of the Caribbean were greatly impressed by the kanoa (canoe) or boats constructed and used daily by the Taino islanders. Christopher Columbus wrote, "On every island there are many canoes of a single piece of wood; and though narrow, yet in length and shape similar to our rowboats, but swifter in movement. They steer only by oars. Some of these boats are large, some small, some of medium size. Yet they row many of the larger row-boats with eighteen cross-benches, with which they cross to all those islands, which are innumerable, and with these feats they perform their trading, and carry on commerce among them. I saw some of these canoes which were carrying seventy and eighty rowers." The kanoa were made from very large trees that were hollowed out over some months. Reminiscent of similar craft in Polynesia, the largest recorded 16th century Taino kanoa were said to hold over 150 people, they were ornately carved, and were used to travel long distances between the Caribbean islands and even into Bahamas, Florida, mainland of South America, Mexico, and Central America. Kanoa - a Taino and Lokono Arawak language term - is still used in Latin American Spanish, and is the origin of the English word canoe. - UCTP Taino News © 2007
Posted by UCTP TAINO NEWS at Sunday, November 25, 2007 No comments: