Columbus and the Enslavement of Taíno People 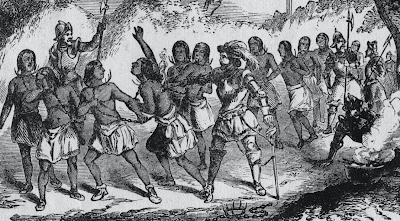 Did You Know: On October 12, 1492 Christopher Columbus decided to take six Taíno people with him upon his return back to Spain. This act was the root of the trans-Atlantic slave trade. In a 1493 letter written to Ferdinand and Isabella, Columbus offered his patrons "slaves as many as they shall order be shipped" in exchange for the ships and resources needed for a second voyage. When he returned to the Caribbean, in February 1495, Columbus took by force 1600 Taíno to be enslaved. 560 slaves were shipped to Spain; 200 died en route, probably of disease and or abuse. After legal proceedings, the survivors were released and ordered to be shipped home. Others of the 1600 who were enslaved by Columbus and his men were distributed among the Spanish-colonial settlers. - © UCTP Taíno News
Sources:
The Diario of Christopher Columbus's first voyage to America, 1492-1493. (1989). University of Oklahoma Press.
James C. Clark of The Sentinel Staff. (2018, October 6). How Columbus created slave trade that changed world's economy. OrlandoSentinel.com. https://www.orlandosentinel.com/news/os-xpm-1992-05-17-9205160196-story.html
Posted by UCTP TAINO NEWS at Saturday, October 12, 2019 No comments:

Did You Know: The term areito (also spelled areyto) is a Taíno word that describes a socio-ceremonial blend of dance, music, song, and poetry. The areito played a significant role in the social, political, and religious life of the Taíno People. In the 15th and early 16th century, Spanish chroniclers in the Caribbean noted that the arieto were presented in the main plaza of the iukaieke (also spelled yucayeque) or village. Sometimes areito were conducted in a designated area in front of the home of a kasike or chieftain. These plazas or ceremonial grounds called batei had their borders defined by standing stones, often decorated or carved with various images, or by earthen embankments. Dances during an areito could vary a great deal. Sometimes there were step-patterns moving along specific pathways. Walking patterns that went no more than a step or two in either direction were also used. According to a few of the descriptions given by Spanish chroniclers, some dances were comparable to what would be called line dances today. All the dances were lead by a tekina (a guide, teacher or dance master) of either sex who would use a call and response pattern of song and steps. Areito leaders determined the steps, words, rhythm, energy, tone, and pitch of a dance sequence. The dances could be based on ancient clearly choreographed steps or new choreography could be presented in this evolving art form.

Saunders NJ. 2005. The Peoples of the Caribbean. An Encyclopedia of Archaeology and Traditional Culture. Santa Barbara, California: ABC-CLIO. Scolieri PA. 2013. On the Areito: Discovering Dance in the New World. Dancing the New World: Aztecs, Spaniards, and the Choreography of Conquest. University of Texas Press: Austin. p 24-43.

Did You Know: Jade is a generic term often used to describe various greenish gemstones found around the Greater Caribbean region, from the islands to the Caribbean-coastal areas of the continent. Archeologists, gemologists and others note there is a distinction between what is termed “true jade” and other stones, sometimes termed “social jade.” True jade includes nephrite and jadeite, which is harder and denser. Jadeite has a range of colors, but nephrite is found in cream and green colors. A related term jadeitite refers to rocks that consist mostly of jadeite, which is used as a carving material.  Social jade varies among serpentine, quartz, agates, turquoise, and radiolarian limestone. In the Antilles, these stones were used by the Indigenous Peoples of the region to produce and or distribute adornments and tools (utilitarian and ceremonial) that had temporal and spiritual significance. While jadeite items are relatively commonly known, serpentine items seem to be the most widely distributed. The lack of documented jadeitite quarries on the islands indicates that it was a valued trade item in ancient times from island to island and or from the continent to the islands. - (c) UCTP Taíno News 2019 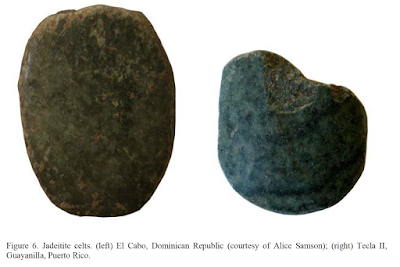 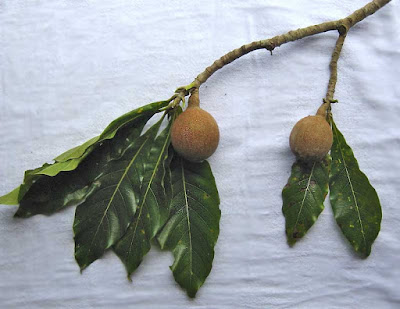 Did You Know: The hagua (jagua, xagua), whose scientific name is Genipa Americana L., is both a tropical tree and a fruit that is found throughout the Caribbean, as well as Central and South America. The fruit of the hagua (pronounced "hah-gooah") have a crown-shaped structure at the tip and turns yellow when ripe. The fruit ranges in size from that of a kiwi to a melon and also has a strange feature: they can get dry, but do not rot. Scientists have affirmed that hagua are a natural source of iron, riboflavin and have anti-bacterial substances. In traditional and homeopathic medicine, hagua is a diuretic and recommend to treat scurvy, venereal ulcers, dropsy, and bronchitis. Local knowledge also affirms the unripe fruit is an astringent, anti-inflammatory and anti-anemic. The root of the hagua has purgative and laxative effects, while a decoction from the bark is used to treat scorbutic ulcers and venereal diseases, in addition to combating anemia and regurgitations of the liver and spleen. The unripe fruit of the hagua also yields a liquid, which is traditionally used as a dye for skin painting, tattoos, and insect repellent or for protection from the sun. The juice of the unripe hagua is colorless, but oxidizes on exposure to the air and gradually turns a black/blue color. This juice is commonly used to dye clothing, hammocks, utensils, and basket making materials or for painting the body during ceremonies and celebrations. - © 2019 UCTP Taino News
Posted by UCTP TAINO NEWS at Tuesday, April 02, 2019 No comments:

Did You Know: January 3rd is the anniversary of “El Grito de Koaiuko (Coayuco)” also known as the Taíno Rebellion of 1511 in Puerto Rico (Borikén). Two of the main leaders or kasike (chief/s) associated in this uprising were Agüeibaná "el Bravo" and Mabodamaka. According to local history, the kasike (chieftain) Agüeibaná "el Bravo" convened a council with the main chiefs where they decided to launch a military offensive against the Spanish invaders. An associated attack against Villa Sotomayor was organized and most of the Spaniards who had settled there were killed. Other offensives were not as successful and both Agüeibaná "el Bravo" and Mabodamaka were killed by the Spaniards during other battles taking place in Aimako (Aymaco) and Yagüesa (Yagüeza/Yagüeca). - UCTP Taino News (c) 2019
Posted by UCTP TAINO NEWS at Thursday, January 03, 2019 No comments:

United Nations Declaration on the Rights of Indigenous Peoples (UNDRIP)

Did You Know: The United Nations Declaration on the Rights of Indigenous Peoples (UNDRIP) was adopted by the General Assembly on Thursday, 13 September 2007, by a majority of 144 states in favor, 4 votes against (Australia, Canada, New Zealand and the United States). The Declaration is the most comprehensive international instrument on the rights of Indigenous Peoples. It establishes a universal framework of minimum standards for the survival, dignity and well-being of the Indigenous Peoples of the world and it elaborates on existing human rights standards and fundamental freedoms as they apply to the specific situation of Indigenous Peoples. The United Confederation of Taíno People was among those indigenous organizations consistently advocating for the adoption of the Declaration and was a regional leader galvanizing support from the Caribbean States and Caribbean Indigenous Peoples communities, groups, and organizations. - UCTP Taíno News (c) 2018
Posted by UCTP TAINO NEWS at Thursday, September 13, 2018 No comments: